“I thought this was going to be crap, but it’s actually pretty good”
Such was Stacey’s confidence in working my custom wargaming system into our group’s ongoing D&D campaign. Right now, we’re about a third of the way through “P1: King of the Trollhaunt Warrens”, and the town of Moonstair is under attack from Skalmad’s forces. Instead of running the encounters by the book, I thought it would be neat to play the raid as a tabletop wargame. After all, they'd built a trebuchet. They’d trained up the guards and placed burning oil on the walls. One of them had even dropped a thousand gold on a ritual to recruit reinforcements from Celduilon. 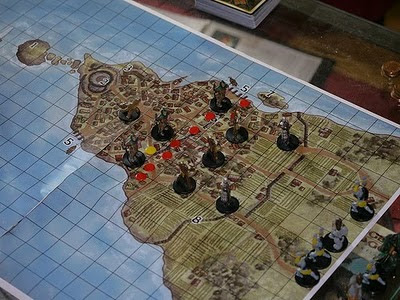 The battle for Moonstair begins
Luckily, I had some confidence in the system I’d created – as it was inspired by another. About five years ago I worked for a video games company down in Bath. Our boss was one of the designers behind the original Warhammer Fantasy Roleplay (or “Warfruppa”, as it’s colloquially known around here), and one of the perks of the job was access to his magnificent gaming table. Every Tuesday night we’d stay on for a session after work, and it was here that he introduced me to the “Piquet” war gaming system.

It’s brilliant. You see, most war games have got it all wrong. You take uniform turns, one side after the other. You choose which unit to move, and when. It’s all very clinical. Real war isn't like that.

In real war, orders get delayed or misinterpreted, opportunities arise unpredictably, and reconnaissance is unreliable: what military strategists refer to as the “Fog of War”. Piquet models this really well. However – and this is really important for D&D – it does so in an exciting, “gamey” way. Instead of choosing which troop to order, you draw cards randomly from a “sequence deck”. Each card costs an action point to draw, and lets you move just a single troop type. Moving individual units costs even more points, so you need to think carefully: move your heavy infantry now, or hold out for that perfect cavalry charge? Sometimes when units get into trouble you’ll find yourself burning points just to pull the right card – wasting opportunities for other, perhaps more valuable, actions.

I've great memories of those sessions down in Bath. Gaming on a full-sized table with proper scenery and professionally painted troops is something else. In fact, it’s possibly the catalyst to my crack-like addiction for pre-painted D&D miniatures. 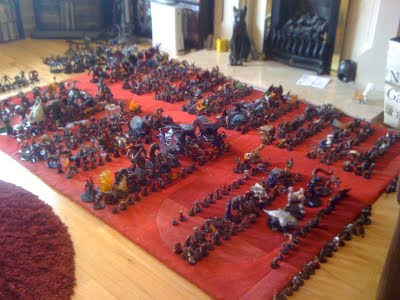 These are just the singles: the dupes live in boxes in the garage
For my D&D mass battle rules I mixed a bit of Piquet with a bit of Warhammer Fantasy Battle, and ended up with something fairly unique. The rules here are tailored to our Moonstair fight, but you shouldn’t have any difficulty statting up your own troops. They'll also work with any edition (or system for that matter). For the Moonstair map, I grabbed the DDI map for the module, overlaid a grid in photoshop, and printed it out over two sheets of A3. We used D&D miniatures to represent each unit, and pennies for Action Points.

Overall, it played out really well. Drawing cards was fun (they cheered when the trebuchet came out!), and they split dice rolls between the group. I’ll be doing it again for sure – and I've a bunch of ideas for how to improve it. I'd like to feature multiple decks (maybe movement, tactics and combat), giving players a little more control over what's drawn. I'd also like to put in cards that create ongoing effects, or can be held back for the right moment (a bit like Tide of Iron). Whatever happens, I’ll be sure to let you know how it goes!


Oh, and credit where credit’s due – be sure to check out Piquet's expanded, official rules. They’re a small company, so they could use the custom. Have a think about shelling out for the pdf – if you like wargames, you won’t be disappointed.
Posted by Will Doyle at 02:24