E is for Ettercap 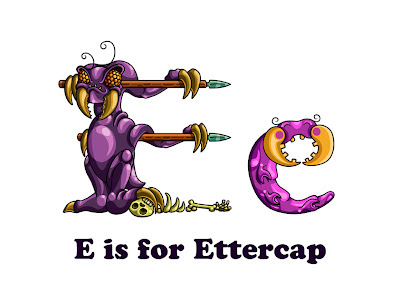 Ettercaps are weird, spiderish creatures that spin sticky webs to capture their prey. With their dinner trussed up and ready to eat, all the Ettercap has to do is sidle over and administer the killing poison bite. They click well with giant spiders, which they keep as pets, or rear as hunting dogs. The 3rd Edition Monster Manual suggests they also keep normal spiders as humans keep bees, although they can't exactly do it for the honey.

The 1st Edition Fiend Folio is very specific that an Ettercap's spinnerets are located "near the anus". I find that detail unnecessary and unsettling, as now I can't shake the image of Ettercaps spinning webs from their bum cracks. 1st Edition Ettercaps are also far more human, basically described as hairy, pot-bellied hobos who spin webs from their bums. I prefer the "insectification" that Ettercaps received in later editions, especially 4th (which added an extra pair of arms to make them even more spiderish). It's the 4th Edition version that Stacey's gone for in her illustration above, which she has lovingly called "Daddy's Girl".
Posted by Will Doyle at 17:26