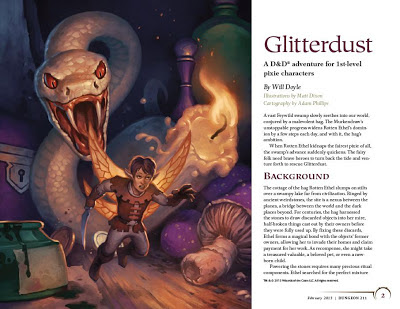 This morning my latest Dungeon offering went live: a strange little adventure called 'Glitterdust', which is designed for a party comprised entirely of pixies. I had a tremendous amount of fun writing this, and it's great to see Wizards of the Coast experimenting with such oddball concepts. Hopefully you'll get the chance to run it too - we played it as a one-shot for playtesting, and it made for an interesting change of pace from our normal campaign.

I'd originally intended the adventure to be dark and mysterious throughout, much like Pan's Labyrinth, but it actually ended up much closer to a Disney movie - featuring talking animals, a bumbling human adventurer, and a wicked hag. This spirit is certainly reflected in the maps they did for the adventure, which have a pleasing cartoon style.