Illusion Cards: Thieves and the Archer 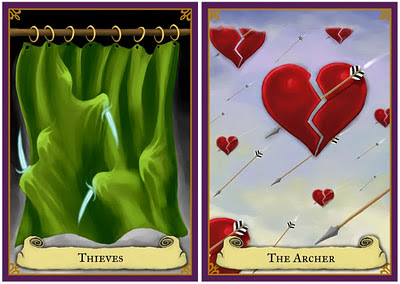 Behold! Two more cards for my Deck of Illusions.
Neither of these turned out quite as I expected, but I'm pleased with them both. I love how the thieves give the impression of being slightly clumsy - but who's betting those magic daggers still cut deep?
Actually, I'm surprised Sandy picked these cards to draw up next, as neither played a particularly prominent role in our game. The Archer wasn't even drawn: it was one of just two cards left after Devlin met the Master. Thieves appeared near the end of H3: Pyramid of Shadows, drawn as the Company battled through a tight maze of haunted passageways. It should have been perfect timing - allowing them to sneak past the banshees that roamed the maze - but sadly Sephirius was having one of those games, and just couldn't shake off the immobilising effects of their screams. So they couldn't leave him.
Splitting the party is famously bad tactics for most D&D players (not least, abandoning party members). Just the suggestion of it gets certain members of my group aghast - probably due to a famous incident back in 3rd Edition. Whilst exploring a besieged citadel tower, two 10th level characters decided to leave the others and quickly scout a stairway alone. "Should we be splitting up?", asked one. "Meh. We can take it", said the other (and that's an actual quote). Three rounds later both PCs were dead: one lying mangled with a broken neck, the other being absorbed by a Lovecraftian Moonbeast. That's eighteen seconds.
Posted by Will Doyle at 22:42