Illusion Cards: Gloaming and Day of the Dead 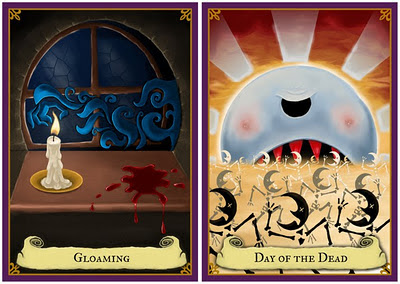 Ah, it's you. How have you been? Marvellous.
Here are two more cards for my Deck of Illusions. I guess we're about halfway there now, and I'm loving the symbolism that Sandy's cooked into this pairing. A pool of spilt blood, a candle about to be snuffed, and an army of marching moon-heads. What can it all mean?
Maybe something, maybe nothing. A while back, I congratulated him for including exactly 13 spears on one of his cards - and it honestly came as a surprise that he had.
In a way, I do a similar thing in my D&D games: include random symbolism on the spur of the moment, and build in meaning later on. In our present campaign, Splug returned from the dead with a mysterious map scratched into his back, Swaard heard a strangely-worded prophecy when he died, and Dia discovered she was the legendary "Starfallen". In each case, I dropped these in with no idea where they'd lead, and thought up meanings later (in some cases, years later). Occasionally, hooks like these lead to wonderful things that make me look clever in retrospect. In other cases, they're simply forgotten.
A handful of things that have worked well in previous campaigns:
Simple stuff really, but some of my best stories have grown from these. Even better, many of them have grown from my players talking about the possibilities around the table. I may be smiling and winking mysteriously, but really I'm thinking "bloody hell, that's a great idea!"
Posted by Will Doyle at 19:59