Lost in the Labyrinth: An Alternate Storyline 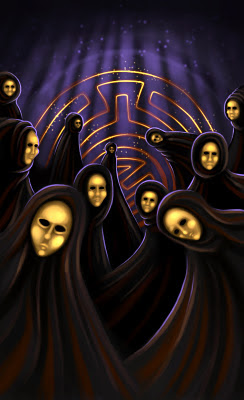 It's almost time to wrap up my Thunderspire Labyrinth series, and look to new things. Amongst other more mundane resolutions (see: waistline), I've committed myself to gaming more this year. I want to play a complete campaign of Gears and Gunpowder in ten parts, one session per month, and get our main H-E campaign as close to Epic as possible. I want to play more, write more, and - most important of all - submit more. This month is a bit of milestone for me, as I've got my first published article coming out in Dungeon magazine! It's really given me the kick I need to take this stuff more seriously, so here's hoping you'll stick around for the ride.

So. Thunderspire. Thus far all we've done is re-imagine a few of the NPCs. Now it's time to take the bull by the horns and look at the adventure as a whole. As far as encounters go, I think it's got some of the best so far. You'll have a fun job converting everything over to MM3 maths, but beyond that it's all pretty cool, especially the Well of Demons. No, the biggest problem, I think, lies with the story.


As written, you've effectively got three "acts". The first ends at the Chamber of Eyes, where we learn that the McGuffin (the captives), has been taken to the Horned Hold. The second act takes us from the Horned Hold to the Well of Demons. However, the link into Act 3 ("Interlude 2") is somewhat clumsily shoehorned into this section. Paldemar - this dude we know nothing about - decides to destroy us, because "we could pose a threat". When we take the fight back to him, the chances are we'll miss his big plan completely. After all, the only clue seems to be a bull's head floating in a vat...

When I played this, I kept the same sequence of locations, but shook up the story. My main changes were:


I'll be the first to admit it's not particularly original, but in my defence I was looking for that "classic D&D" feel. Not to say it doesn't have a few neat flourishes - final battle in a chamber containing a moving map of the labyrinth made from smoke? Yes, please!

Anyway, see what you think. I like to think it holds together better as a narrative, at least.

Email ThisBlogThis!Share to TwitterShare to FacebookShare to Pinterest
Labels: dungeons and dragons, lost in the labyrinth, thunderspire labyrinth