Brugg really needs to be an Elite. Given his role, he's likely to end up getting in the faces of most parties, but as written he doesn't really pack a punch at all - he's just a bog-standard ogre. I'm glad my group never faced him in combat, as they'd have flattened him in seconds. The Brugg you see below uses Monster Manual III maths, with a few custom power combinations I've had fun with before. His goblin lickspittles are inspired by the blue thieves from the Golden Axe video game: whack them, and they'll drop coins. Here though, that property comes with a nasty twist...

As can be seen from the flavour text, Brugg has a bit of an inflated ego - and a soft spot for pretty girls. When we played, we had a lot of fun with Brugg's leering approaches, his bride-to-be's attempts to delay their marriage, and the clever way she turned him against the mages. Hopefully you'll have similar fun if you use him as such in your games. Should it come to blows, Brugg and his six goblin lickspittles equate to a level eight encounter for five players: a suitably tough fight for this adventure. 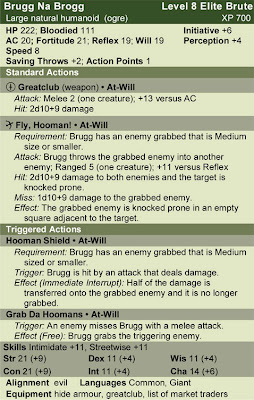 
The hulking ogre Brugg Na Brogg works as head enforcer and master tax collector for the Mages of Saruun. Accompanied by his scampering tide of goblin lickspittles, Brugg is a hated figure within the Seven-Pillared Hall. Those who dare call him “two bites”, as he always takes two cuts of every profit: one for the Mages, and another, smaller cut for himself.  When accompanied by the masked Ordinator Arcanis, such hatred turns to dread, for this means that Brugg has been ordered to kill, and someone shall soon pay ultimate price for defying the Mages of Saruun.
Brugg is more intelligent than your average ogre, and years of collecting taxes have earned him a measure of street smarts. In fact, Brugg’s status, and the trust the Mages supposedly invest in him, has given him a warped, elevated sense of self worth. Brugg believes he is the “Hero under the Mountain”, and as befits a hero, he requires the finest foods, lodgings, silken sheets for his cot – and a beautiful bride. In this last respect he has yet to find a suitable candidate, so any pretty female who enters the Hall may find themselves on the wrong end of his amorous approaches. 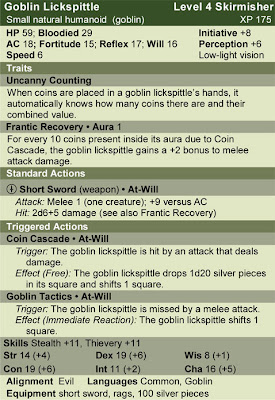 Thankfully, Brugg isn't looking for a breeding partner. Instead, his lover is required to wash him, comb his knotted hair, and swoon over him in public. Brugg is amenable about the terms of their arrangement, but only to a point: for example, his bride may be granted some time to herself, or can perhaps buy her way out of certain responsibilities, but defy him and he’s liable to bite her head off.  Even so, those looking for protection within the Hall, or hoping to spy on the Mages, could find the partnership advantageous…
Brugg's lickspittles are also an oddity. Whereas most goblins can't count above three (with anything above that just being "many"), these inbreeds possess an uncanny ability to count coins. Fill their hands with gold, or scatter silver on the floor before them, and they'll value it in a heartbeat. Brugg uses them to verify payments and carry the loot back to his customhouse. For their own part, the goblins despise him, but are too afraid to show defiance: when Brugg acquired them, he made a show of eating their seventh brother in front of them as a warning.
Posted by Will Doyle at 18:45

Email ThisBlogThis!Share to TwitterShare to FacebookShare to Pinterest
Labels: brugg, dungeons and dragons, lost in the labyrinth, thunderspire labyrinth