B is for Bullywug 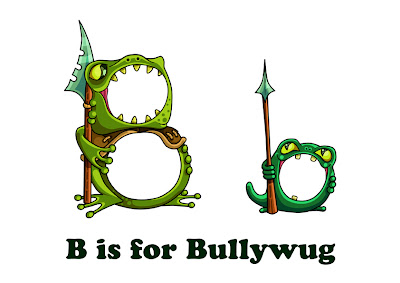 Bullywugs are a warlike race of bipedal, swamp-dwelling frog things. They live in disharmony with their environment, often overfishing or outstripping their hunting grounds until their whole tribe is forced to move on or starve to death. Such debauched behaviour is taken a step further in 4th Edition: now their very presence warps and pollutes their homeland, perverting it into a "dismal echo" of what it once was. In a stroke of off-kilter design genius, killing a bullywug actually causes you to regain hit points, as though the land itself were thanking you! Sadly, such blessings are entirely out of whack with their cute, Kermit the Frog appearance.
Posted by Will Doyle at 13:28