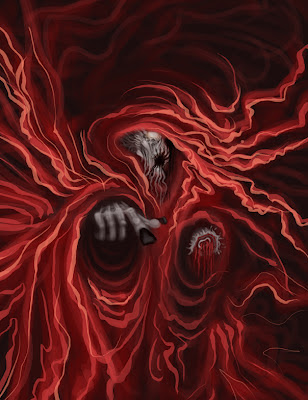 My computer kindly informs me that today is "Draw Vecna" day. At least, it is according to Twitter. Some talented bloggers have joined in, including James Stowe, whose work I greatly admire. In the spirit of this holiday, now seems an appropriate time to share Stacey's interpretation of the "Father of Lies". Unfortunately we're not on Twitter, so we can't really join the party. Looks like it's just you and me.

Funnily enough, Vecna plays a pivotal role in our campaign right now. After months of hiding his eponymous hand under a glove, the last session saw our ranger tragically cut down, just as he'd found a way to rid himself of the curse. I called things to a halt just as the glove was torn from Vecna's still twitching hand, exposing the treachery to the whole party. Amongst them was our cleric of Ioun, who isn't likely to appreciate the news. It was, as we like to say in England, "a real Eastenders ending".

I've also been having fun with Vecna's backstory. Since the start of the adventure, the ranger has been carrying a magical lantern haunted by a beautiful ghost girl. Over time, the two have fallen in love (he himself is a Revenant; the "Ghostmaster" of the haunted town of Hammerfast). The girl has little memory of life, knowing only that her father killed her. So far, we've had two more Eastenders moments based on this: the first being the revelation that her father is actually Vecna, and the second being the discovery that he used her body as his own phylactery. Kind of twisted, but hey, it's Vecna.

I also made the lantern useful in its own right. These last few months I've been bringing lots of homebrew items into the campaign, some of which I may share here one day. For now, here's the lantern. Thanks to Tjaart for the picture - and I promise we'll find some cool way of bringing your character back! 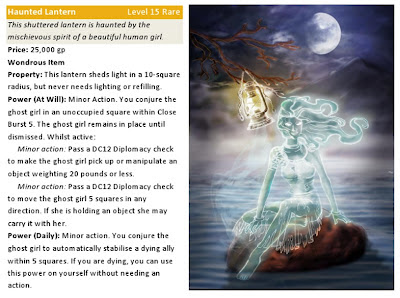