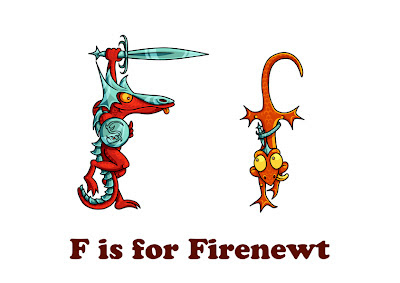 Firenewts were a race of bipedal, lizard-like marauders that lived in deserts and arid mountains. Their raiding parties would strike out from volcanic lairs in search of tasty human captives, which they'd take back as food for their larders. As a species they were barbaric, tribal and thoroughly evil. Somehow, I don't think Stacey's illustration fully captures this.

I use the past tense because firenewts eventually went the way of the dodo, as far as the game goes. I guess D&D can only support so many  lizardmen (or "lizardfolk" as we're inclined to say now, to avoid discriminating against lizardgirls). Most likely they were usurped by Salamanders, which in reality are newts, and were once thought to have an affinity for fire. So they're the same thing really. In terms of lore, I suppose I prefer the elemental Salamanders (though I think they need the word "man" added to the end of their name).

As she was drawing them, Stacey decided that Firenewts like to dance, which is what this one is teaching his boy. So I suppose that adds something new to their lore!
Posted by Will Doyle at 14:27 1 comments