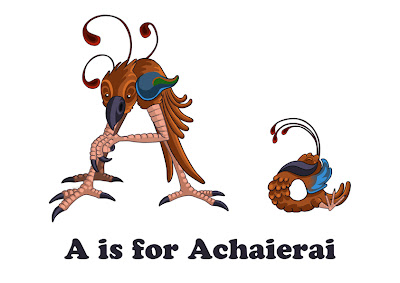 For a while now, Stacey's had this plan to illustrate the alphabet according to D&D - the sort of thing you'd see hung on a classroom wall - with grown monsters for the upper case letters, and baby monsters for the lower case ones. The idea came from a children's illustration class she attended last year, where her tutor set the challenge of bringing letters to life. With 'Beholder Basic' gearing our thoughts towards kids, now seems an appropriate time to share the first.

Achaierais are massive, 15-foot tall flightless birds that prowl the Infernal Battlefield of Acheron. Despite their Sesame Street features, they're actually thoroughly evil, and delight in torture. They speak Infernal (in high-pitched squawking voices, I imagine), and can belch out clouds of black, maddening gas. Sounds to me like someone was smoking some of that mad gas themselves when they cooked them up.


For Beholder Basic, you'll see I've boiled the list of skills down to just four.


Athletics: Want to leap up onto that balcony? Hold your breath underwater? Lift that portcullis?  Then test your Athletics.
Lore: Decipher that coded message? Recognise the ancient king in that carving? Activate that magic portal? Lore. This skill encompasses Arcana, History, Nature and Religion.
Perception: As it was. Use Perception to spot traps and secret doors, or hear that assassin sneaking up behind you.
Stealth: For when you want to sneak up behind them. Also incorporates Thievery, so you can now use Stealth to pick locks and disable traps. Basically, everything sneaky.

Of course, this means some omissions. There's no Heal - in 4E, I feel the cost of spending an action is enough, and the DCs are so low anyhow - and no Dungeoneering (who uses it anyway?). Perhaps most noticeably, all the social skills have gone: Bluff, Diplomacy, Intimidate and Streetwise. My reasoning here is simply to encourage role-playing - get kids acting out social encounters rather than relying on dice - so I suppose that's one aspect where Beholder Basic plants its feet firmly in the Old School.

In a similar sense, Sandy and I have been having this ongoing discussion about whether or not Perception should be in the game. Rather than rolling dice, he argues that players should describe where they're searching. For instances where a roll may be preferable - such as searching for an invisible enemy - the DM just sets a DC for a flat D20 roll. I'm on the other side of the fence for now, but I may change my opinion. What do you think?
Posted by Will Doyle at 16:42 5 comments


Here's something silly I've been working on. What if there was a bone-simple version of 4th Edition that kids could play? That slaughtered some of the sacred cows - like ability scores - and shamelessly hard-wired collectible fortune cards and tokens into the core? And what if - just for the hell of it (or perhaps in protest against all this "back to basics" stuff flying about) - we kit-bashed this monster into the oldest edition of D&D available: the original D&D Basic Set?

You see, the other day I discovered that I own the "Holmes Edition" of D&D: one of the original boxed sets, printed in 1978. I've never actually played it - I was three years old at the time of release, so the best I could've done was chew on it - but reading it now is quite an eye-opener. I cut my teeth on the red box, published almost ten years after the original pamphlets, and I think it's fair to say they'd tidied things up by that stage. In comparison, Holmes sounds like it was written by a madman. Still, despite its scatter-shot approach to layout and tone, it's not without charm. In particular, reading this edition shows me that some of our sacred cows aren't as holy as they seem. Take races, for example. Here we find a wonderful column that suggests:

"At the Dungeon Master's discretion a character can be anything his or her player wants him to be. Characters must always start out inexperienced and relatively weak and build on their experience. Thus, an expedition might include, in addition to the four basic classes and races (human, elven, dwarven, halflingish), a centaur, a lawful werebear, and a Japanese Samurai fighting man."

And people complain about "the circus coming to town"? Also note, "halflingish" - really quite beautiful.

Overall, reading Holmes made me wonder what I'd like from a basic set today. I've bought both the Revised Red Box and the Pathfinder Beginner Box, but in truth I think that both of them are flawed. They're trying to teach overly complex systems to an audience that's really too young to get it. Equally, I don't think the answer is to go back to Original D&D. Rules-wise, 4th Edition was a pretty lean beast, and - despite the hate - introduced some new toys to the box that I think our kids would really get on with. Power cards, for instance. I think it's a shame to throw these out in favour of graph paper and pencils. What I want - and I'm not talking 5th Edition here - is to see a basic version of 4th Edition that's somewhere between the D&D adventure boardgames and the role-playing games, but fully playable in the "old-fashioned" way; i.e. without tiles and miniatures.

The character card you see above - artwork care of Sandy! - represents what I'd work towards:

Who knows, maybe I'll take it further, and actually write this thing up? Take that as a warning.
Posted by Will Doyle at 15:16 4 comments 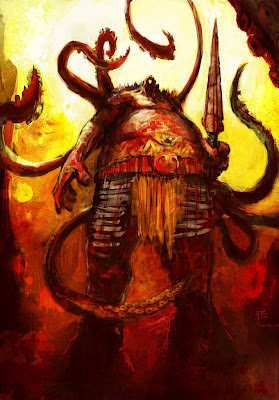 This obese cyclops is the bludgeon of the fomorian government. When trouble flares in the crowded slums, Chudda Feg delivers a message spelled out in blood, bile and broken bone. Against the hated eladrin he is a juggernaut, screaming from his trap like a missile flung from a trebuchet.

Chudda was reared in the slave pits of Behol, where his prodigious size and lumpish mind made him a prized gladiator. His fury on the sand caught the eye of the fomorian statesman Magg Ra Bhrune, a rising star in the city’s regime, who took him on as bodyguard. Here he earned a brutish signature: tearing the arms off those who defied his master.

Chudda’s mutations stem from this dark habit. Sent to intimidate a local drug ring, he stumbled into a meeting with their hidden supplier: an Aboleth working for the Fifth Coil. Undaunted, Chudda exacted his orders, tearing off the Aboleth’s barbed tentacles as his prize. When the Fifth Coil came for him, they grafted those same tentacles onto his shoulders, and held open his one eye to the screaming horror of the Far Realm. His mind shattered, Chudda Feg was thrown back to his master as a crude warning of what was to come. Now, his only use is mayhem. He no longer understands the act of killing: instead, it has become a curious reflex. Who knows what madness whorls in his mind now? What horrors that eye has seen?

ABOUT THE ARTIST
This week's artwork comes from Jason Hickey, art director of Cobweb Games and Thoroughly Nice Chap. Jason and his brother Sebastian recently published their own role-playing game, Chronicles of Skin, using money raised from a particularly successful appeal on IndieGoGo. I got my copy through the post the other day, and it's a thing of beauty. Go and buy one for yourself this instant!
For me, this has been a fantastic opportunity to design to an image, which isn't something I do often. Jason's pic initially made me think Brute, but ultimately those tentacles turned him into a Controller. Forcing motion during combat is one of 4th Edition's strengths, so I thought I'd play to that. I'm also quite proud of his name, which is a homage to two favourite creatures from my youth: the Cannibalistic Humanoid Underground Dwellers, and the Lord Weird Slough Feg.
I threw Chudda Feg against my players over the weekend, giving me a chance to playtest him in earnest. He was pretty nasty, but I felt he needed some tuning. The monster you see to the right is the result of that.
Posted by Will Doyle at 16:27 0 comments

In January I had my first article published in Dungeon magazine: "Jaggerbad Skyhouse", a tavern strapped to the back of a colossal iron dragon. I've been waiting for months to see this published, as I actually wrote it back in June 2010. I remember my initial submission was very spontaneous. I was browsing the D&D website during my lunch hour, and noticed that their submission window was just about to end. I fired off a quick pitch and then promptly forgot about it. As it happened, I struck lucky: they were doing a new series on taverns, and my submission looked like it may fit the bill.


Jaggerbad Skyhouse was first conceived back in my 3E days, where it served as an exclusive flying hotel for the Gnome King. No planar travel, and certainly no Summer Queen, but the atmosphere was the same. I played a one-on-one adventure there with my friend Giles, whose gnome illusionist unravelled a high-flying assassination plot conducted by a shape-shifting succubus.
I figured I'd need a twist to tie it into 4E lore, so I made it skip between planes and connected it to the Court of Stars. One of the things I really like about 4E is that push towards planar adventuring in the Paragon and Epic tiers, so I figured DMs could use something that actually gets them there. I also love the feywild, so I wanted to write something that felt true to that. Lastly, I knew Giles would curse my name forever if I didn't slip Miramar in there somehow: so there she is, number 10 on the NPC table,"Gnome Illusionist riding a Beholder" (Stacey's 4E character also smuggled himself in at number 4: "Turbaned, gold-painted dwarf").

One of the great things about submitting to Wizards is wondering who they'll get to draw your cover art. In my case, I got lucky. They commissioned Adam Paquette, and if you've seen the picture, I think you'll agree his rendition of the Jaggerbad is truly wondrous (sadly it hides behind the paywall). On the day it was published I was headed down to Cornwall, and it went live just as my taxi turned up. I risked missing my train while my painfully-slow internet connection spooled the picture through - but it was worth the wait, and I had a smile on my face that lasted the whole journey.


I think the article's gone down well. I've had a great comment here on the blog, and the comments over at the Wizards site and on EN World have been incredible.

Last year, I introduced the Skyhouse into our ongoing 4E campaign. For my players, it was like being part of an early screening. As it happened, only one member of the group made it on board, so I had the other players take on temporary roles. Interestingly, the character that made it belonged to Giles (so for sanity's sake I took his 3E character off the random NPC table!)

The encounter we played was intentionally very weird, with a strong fairytale theme. It's sometimes difficult to pull these ones off: you have to counterbalance all those twee moments with a healthy dab of darkness. In a sense, if you're going to lay on some Labyrinth, you'd better serve it with a side order of Pan's Labyrinth.

Anyway, I thought it would be a nice present to write it up and serve it as a companion piece to the Dungeon article. So here it is: a side-trek for any level that takes your players on a strange, dreamlike journey through the tavern's upper floor.