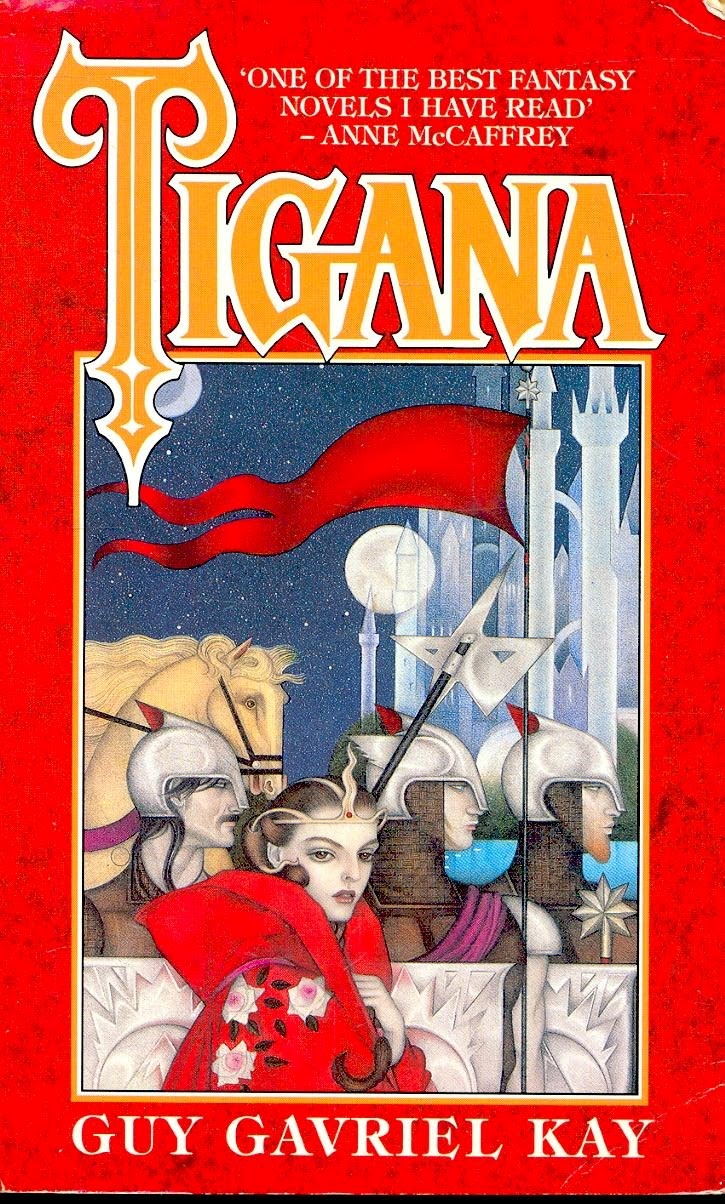 The 5th Edition of the D&D Player's Handbook expands on 1st Edition's "Appendix N" to include a gaggle of modern authors. The original list is now split in its entirety between two appendices in the PHB and DMG (E and D). The PHB deals with novels while the DMG covers various game design and reference works. Of the new works featured in Appendix D, I'm most delighted to see Ian Mortimer's The Time-Traveler's Guide to Medieval England. This compact reference book should be read at once by any DM worth their salt. That's right, it deserves another read even if you've enjoyed it already.

But it's the fiction I'm most interested in here on the Pie. Why were these new authors chosen? How can their ideas inspire your own stories? Are their books worth reading? In this painfully infrequent series of posts, I will be your captain as we navigate this sea of pimple-faced fantasy contenders. In each case, I will read one of the books (or one part of a series), and then write something about it. A review, for sure, and something crunchy you can use in your own games, if we're lucky.

Tigana is a story of rebellion staged in the Peninsula of the Palm; a fantasy kingdom dominated by rival sorcerer kings. King Brandin of Ygrath rules the west, while Alberico of Barbadior rules the east. Both are conquerors from overseas. For twenty years they've played a dangerous game of brinkmanship, with neither side willing to commit to war. The story centers on a group of troubadours from the poor province of Lower Corte, who sow the seeds of a conflict designed to wrest control from the tyrants. We're drawn into this conspiracy alongside the bard Devin D'Asoli, who learns that King Brandin has lain a terrible curse on the Palm. In revenge for killing his son, the sorcerer cast a spell to remove all memory of his enemies' homeland from those born outside it. Those native to Lower Corte before the spell was cast still remember its true name: "Tigana". No-one they speak to can comprehend it. As the years roll by, Brandin's enemies are to bear witness as the spell erases their homeland from history.
It's a powerful idea, and Kay delivers well, gearing his story around strong themes of loss, memory, love and revenge. Most notable of all is the ambiguous rendering of good and evil. We come to pity Brandin as a grief-stricken father who cannot let go of his murdered son. Even our heroes, led by the noble Prince Alessan, cross many lines to achieve their goals. Nobody is innocent, nor guilty. In the field of fantasy, this raises the bar quite high, and for that reason alone I recommend it.
It's not perfect. Some characters drift out of the story after a while, seemingly for no reason other than to get them out of the way. At times the central premise - the spell - also seems undermined by the logic surrounding it. Tigana is at first forgotten, but later we learn that some foreigners know of "that province whose name they can never remember". It's a little inconsistent. Do people know what's happened to Tigana or not?
Tigana works best during its interludes into Brandin's court, where we tread alongside Dianora, the king's treacherous and divided royal concubine. There are some great scenes here, which strike to the heart of the moral ambiguity running through the book. Without giving anything away, Kay also knows how to end a story well, which I think is something of a rare talent. This is a great fantasy novel, and certainly earns its place on my recommended reading list.

Three things can define how a fantasy world sits in the genre: how similar it is to our own, how it handles magic, and how it deals with religion. Kay's "Palm" is a facsimile of the Italian "Boot", replete with feuding nobles, Italian nomenclature, and plenty of wine quaffing (smoky blue wine made from frozen grapes, of course).  Above this, Kay centers his story around the strong historical theme of rebellion. For your own campaigns, why not do the same? Once you have your theme - civil war, rebellion, succession, or whatever- just rebrand historical characters as NPCs. In my current 4th Edition campaign, for example, I have an effective Oliver Cromwell (with ineffective accent).
The Palm has its own religion, the Triad. An incestuous pairing between Adaon of the Waves and Eanna of the Stars gave birth to Morian of the Portals, goddess of death. Of particular note is how Kay ties these three gods to his land, and how the church's rituals affect his calendar. The divine conception took place on the island of Chiara, for example, making this a holy place. The rituals on "Ember Days" are of great importance to the locals, and the conquerors soon adopt them for political ends. In your own games, religious rites or festivals help ground your pantheon in the culture of your world. Beyond that, try to think of how the gods affect the world itself. Perhaps a god once sat on that flat-topped hill after his meal? Perhaps the blood of an injured diety turned that river red? Perhaps the summit of that mountain leads to the heavens?
Kay's magic users wield psychic abilities. The sorcerer kings can manipulate the minds of others, or call out to their servants across great distances. When needed, they can dislocate their own bodies, or even cause their enemies' heads to explode! The tyrants seem stronger than the local mages, who must chop off one or more of their own fingers to gain their magic. With wizardry outlawed, these mages mask their sacrifice through illusion. They're always alert for "trackers": sensitives who can detect their spells and use the traces to hunt them down. What sacrifices must magic users in your own world make to gain their power? Is there something common to all spellcasters that makes them identifiable?
Tigana will certainly inspire my own games. I thought I'd wrap this up with my own version of the spell that lives at the heart of the story: the spell of forgetting. Until next time!

You cause a single unique object, creature or location no larger than 10 miles in diameter within range to be removed from the memories of all intelligent creatures within your current plane. All creatures affected by the spell cannot comprehend the target if they read about it, or are told about it by an unaffected creature. Affected creatures are aware of the target while it is in sight, but forget about it when it is out of sight.
If the target is a creature, it does not forget its own existence. If the target is a location, all creatures currently occupying that location do not forget the location. If the target is an object, any creature currently holding the object or carrying it on their person does not forget the object.
The spell lasts until dispelled, or until you die. If dispelled by a creature other than yourself, you regain the point of Intelligence expended in the casting.
Posted by Will Doyle at 21:55 2 comments

We have a winner! 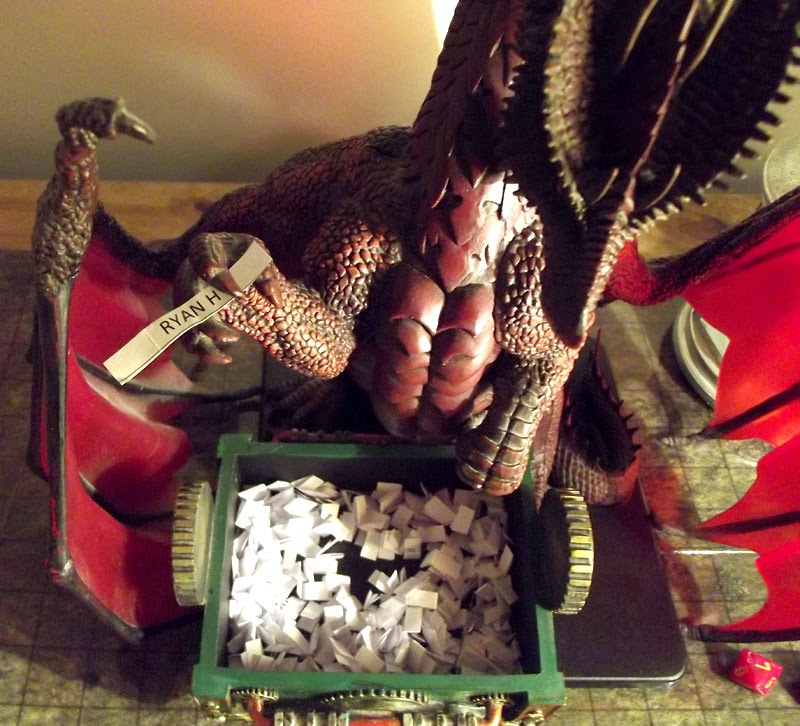 The Great Red Wyrm has spoken, and Ryan Hobbs has won the Player's Handbook raffle!

The raffle raised an amazing £662 for Games Aid. That's over a thousand dollars, and 331% of the fundraising target! Many, many thanks to all who donated - it's a great cause, and the money will go a long way to helping some seriously ill kids. You're the best!
Posted by Will Doyle at 10:08 0 comments