Come in, sit down, and help yourself to a glass of mulled wine. I'm taking a break from my "Lost in the Labyrinth" articles to make a contribution to the blog carnival over on Daily Encounter. They're hosting a series of articles on loot, so here's hoping they'll pick up on the article below and copy it over. At least, I think that's how it works. I'm new here.

So, without further ado:


TREASURE WITH A TALE
“There comes a time, thief, when the jewels cease to sparkle, when the gold loses its luster, when the throne room becomes a prison, and all that is left is a father’s love for his child.”
King Osric, Conan the Barbarian (1982)
What adventurer does not dream of the glittering treasure hoard of the dragon? Piles of gold, jewels, and enchanted items:  the lost relics of ages long forgotten.  It’s not for nothing that such an image currently sits on the cover of the Dungeon Master’s Guide.
Yet it’s interesting to note that in history as in legend, treasure often means more than just gold. In ancient Britain, kings and chieftains would commission fine jewellery from the Mediterranean, to be worn as a display of wealth, status and majesty – even carried to the grave.  In Rome, rings were worn to denote rank, with sumptuary laws dictating the metals you were entitled to wear. Other cultures bind their faith into precious metals and stones. In Islam, for example, it’s considered taboo for men to wear gold. In short, for as long as treasures have been crafted, people have ascribed meaning to them.
In our games, such wondrous relics most often end up as plain old loot: “fluffy currency”, if you like. Players have been conditioned into dividing their treasure into just two categories: magic items and bankable loot (which most often goes towards buying more magic items).
DM: “You hold a set of jewelled nesting dolls, each crafted in the image of the goddess Erathis, one made of jade, another of ivory, and a third made of onyx”.
Player: “Nice. How much are they worth?”
DM: “As a set, about five thousand”.
Player: “Sooo... shall I just add that in gold to the treasure sheet?”
We need to stop treating treasures as fluffy currency, and start viewing them as an opportunity for story.  Let’s take The Hobbit as an example: whilst the book introduces magical treasures like the One Ring, Sting and Glamdring, ultimately it’s the Arkenstone that drives the story. This vast gemstone means more to Thorin than mere wealth: it represents heritage. It’s an heirloom, a symbol of office for the King under the Mountain, and Thorin will do anything to recover it.
The following tables are intended to get you thinking about treasure as an engine for story. Once you’ve rolled to determine your treasure, roll again for a hook, and then for a benefit. If we’re lucky, adding properties like these to our treasures will encourage our players to treat them as more than just cash stamps. 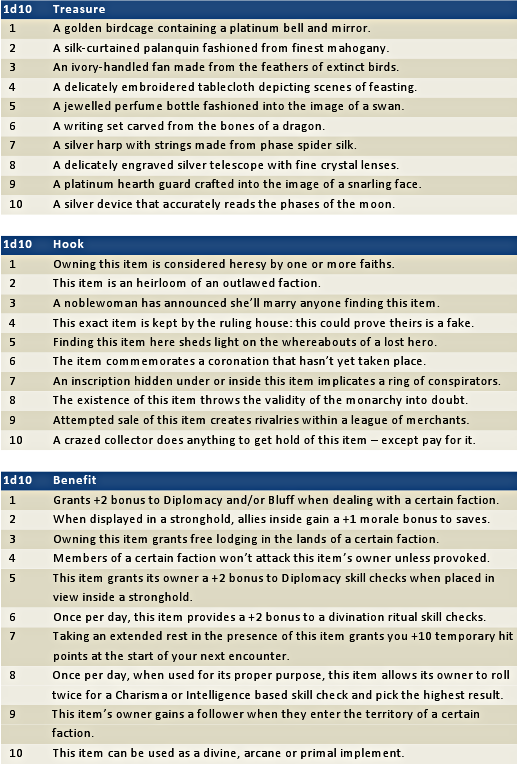 Email ThisBlogThis!Share to TwitterShare to FacebookShare to Pinterest
Labels: dungeons and dragons, loot