Lost in the Labyrinth: Surina 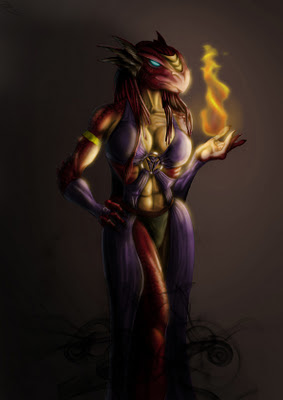 My motivation for redesigning Surina and Darkseeker was to give them powers that accentuate a defining trait. Darkseeker's a werewolf, so he gets lupine powers. Mezzothraxia's presence on the battle map reminds us that Surina's made an infernal pact.


Focussing characters around a single mannerism, talent or "schtick" is something I picked up from work. When I write a bio now, I always start with something like "Noah, the Nervous Professor". That way our artists have a strong theme to work around. Add too many traits beneath that header, and the concept can get muddied.

When designing NPCs, try gearing powers around their schtick. If they're cowardly, give them a power that makes them retreat when certain triggers occur. If they're brash, it keys off overwhelming odds. Determine what makes them different, and then bring that out on the table. Guaranteed, your characters will be more memorable.
COMPANION CHARACTER: SURINA
The Seven-Pillared Hall is loud with whispers. Grimmerzhul spies wrest knowledge from their Deepgem rivals, while House Azaer and the Mages of Saruun speculate in secret on the Underdark markets. To prosper, one must learn to pan truth from a river of rumours. In this matter, nobody is more valued than Surina of the Guttering Flame.

Surina operates as a knowledge broker, moving like a wraith from the Taphouse to the Halfmoon Inn, and through all the stalls between. What she doesn't learn first-hand comes to her from others. Guildsmen trade rumours with her like-for-like, and beggars bring her scraps to mull on. For the broker, the returns are worth more than the expense. These days the Grimmerzhuls come to her first, as do the Azaers. A single, well-placed lie, and they'll turn against each other like dogs... 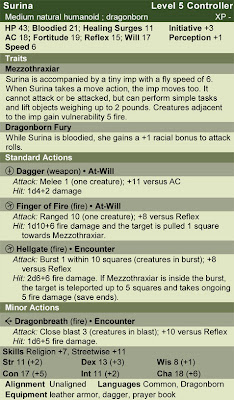 Surina's Secret
Unknown to the denizens of the labyrinth, Surina heads the Guttering Flame, a militant splinter of the church of Erathis. To the Flame, the Underdark represents a hand poised beside the candle of civilisation, ready to snuff it out at a moment's notice. Those who deal with the darkness invite oblivion, and must be destroyed. Having infiltrated the Seven-Pillared Hall with her brethren - a half-dozen cultists posing as beggars and market traders - Surina is playing the long con. She's worked her way into a position of influence, and now hopes to bring down the Hall by seeding a war between the dealers. She's gambled everything on this - even her own immortal soul. Her daring pact with Asmodeus has brought more than power; it's given her the perfect cover. With her hated imp on her shoulder, even the traitorous Drow trust her.

Only the Mages of Saruun remain inscrutable. Surina cannot advance her plans until she knows their weaknesses, and she'll do almost anything to find out what they are. If the PCs have an opportunity to move against the mages, Surina joins them in a heartbeat. 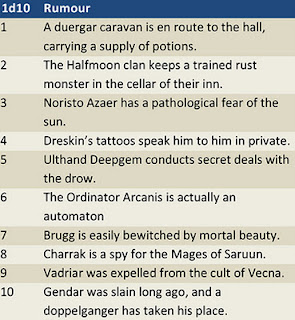 When Surina hears of their arrival she makes it her business to learn everything she can about the PCs. If their objectives are just, she may even approach them with an offer of aid. Surina makes a powerful but dangerous ally: few know better how to wring the hall's secrets, but cross her and she'll make their stay very uncomfortable indeed.

Irrespective of any deal, the PCs can always call upon Surina's services as a knowledge broker. For a bag of 200 gold, she'll provide the answer to any one question: the location of the Bloodreaver's secret hideout, for example, or a backdoor into the Grimmerzhul trading post. For 10 gold, Surina can sell the PCs a rumour (roll a D10 and consult the table to the right). Whether these actually bear fruit is up to you.

Email ThisBlogThis!Share to TwitterShare to FacebookShare to Pinterest
Labels: dungeons and dragons, lost in the labyrinth, surina, thunderspire labyrinth