D is for Dracolich 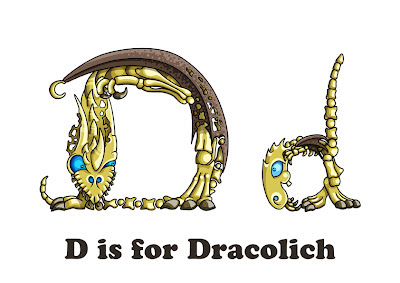 A dracolich is a dragon that has traded its own mortality for diabolic power, raising itself as one of the undead. Even as its body decays into tatters, its soul remains preserved in a well-hidden soul jar, or phylactery. When its body is destroyed, it reforms again near the phylactery just a few days later. Only by destroying the phylactery can the dracolich be properly slain.

Now, dragons practically live forever as it is, and are extremely powerful. So they'd have to be fairly power-crazed to go through the ritual of lichdom, right? Especially if they're only wee, like the adorable little wyrmling Stacey has drawn above!
Posted by Will Doyle at 16:53