The Tyrant of the Imagination Pt.II

"Raise Dead" makes Monte Cook question the afterlife of the D&D world. If magic can bring back the dead, how accessible is it? Don't gods care about souls being swiped from under their noses? If resurrection carries nothing more than a monetary cost, why don't wealthy kings live for ever? I think it's odd such questions are brought up without mentioning 4th edition, because part of its cosmology was actually created to answer this. As James Wyatt and Jennifer Clark Wilkes wrote in Worlds and Monsters:

For 4th Edition we wanted a system that is much more powerful, open, and sophisticated than D&D's official cosmology has ever allowed before, one that DMs can easily use, customize, or even ignore, depending on their campaign's needs. It has to support the idea of souls, and adventures built around them, but it must provide a solid reason for why most people are not resurrected (when was the last time you read a fantasy novel that featured heroes continually returning from the dead?)

Hence the Shadowfell. In 4th edition, the progress of the soul after death is detailed explicitly: first it passes into a gloomy echo of the world called the Shadowfell, where it lingers for a while before passing on to "somewhere else": a fate even the gods can't explain. Some souls rebel against this, exerting their will to pass back to the land of the living as ghosts or revenants. Only those who pleased their deity in life may join them in the Astral Sea, where they abide for centuries in their god's dominion. Others are fated to return to the world to fulfil a great purpose.

And there it is: destiny. A concept so ingrained into 4th Edition that your final levels demand you choose one. It's a source of some contention: the system doesn't work so well for campaigns where you start as a villager, progress to a mercenary, and end up lord of a small border fortress; instead, you start as a hero, become a champion of your world, and end up nothing less than a demigod. Some may not like this, but it does neatly answer the resurrection question: in 4th Edition, you return because you have a destiny to fulfil.

In my campaigns, the Raise Dead spell is more of a legend. Most temples keep a crumbling scroll under lock-and-key, using it symbolically as part of the burial ritual. It's extremely rare - almost unheard of - for the gods to actually answer, but if they do, the costs can be paid to bring the hero back. News of their resurrection travels far and wide, bringing them great attention. In play, such events go a long way to supporting the campaign's epic nature. In fact, death is often the biggest driver of my plots:


Each of the above cases was unplanned for, and went on to define the campaign: in short, like everything that happens in a roleplaying game, death and resurrection are best seen as a story hook. As I argued in my last post, there's a definite a game-play need for Raise Dead. With the "fluff" side so easy to explain, I think it makes sense for the spell to be codified as part of the core rules, not presented as an optional module. 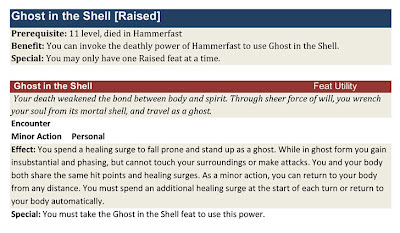 NB: Thanks to Tjaart for the illustrations here, and in the last post!
Posted by Will Doyle at 17:45