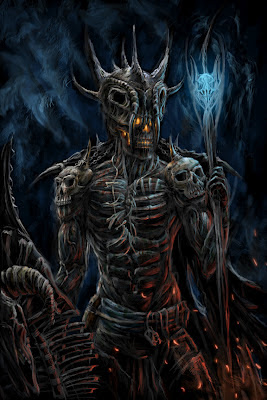 Methragor the Red was famed for his mastery over humankind. Though young, his path to power was carved by an immense network of spies, robbers and assassins, many of whom had no idea they were working for a dragon. Methragor's Machiavellian schemes made him a deadly adversary, but it was his cruelty that finally brought him to the attention of Orcus, Demon Prince of Undeath. The dragon's penchant for periodically eating his most favoured servants appealed to the demigod, who offered him lichdom in return for undying service.

Stripped of his earthly body, Methragor now appears as nothing more than a jawless dragon skull. Such appearances are deceptive though, for in death as in life, Methragor relies on his puppets. When the dragon's skull is worn as a helmet, Methragor immolates his victim and raises their body as an undead vessel for his mind. In battle he surrounds himself with devout orcish warriors, each one sworn to sacrifice their body should his current vessel fail him.

Today Methragor serves Orcus, but his scheming ways are far from over. He longs for a way of escaping his servitude; and with an eternity to plot, remains confident he shall someday find one....

ABOUT THE ARTIST
This week's guest art comes from Paul Worster, a really nice guy who I worked with at Frontier Developments. Paul is a talented 3D artist who shared my pain on the sadly-cancelled Outsider project, and more recently, on the much more successful Kinect Disneyland Adventures (where I did some work as a writer). This generous submission to the Pie took me completely by surprise this week, but look at him! I couldn't be happier working with this creepy villain - and now my players have another memorable adversary to fear. As for Paul, do make sure bookmark his stunning website, and drop by his blog. There's lots more great stuff to see! 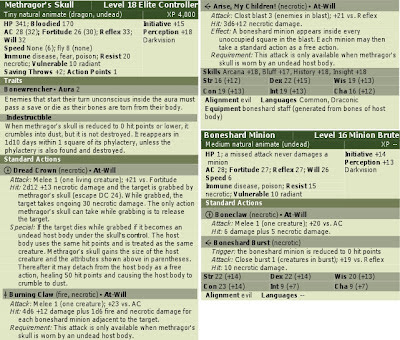