Yesterday we attended our first RPG convention: Dragonmeet 2013, which was held in Kensington Town Hall. It's only a day-long affair, but it's been running for decades and tends to attract quite a buzz. This time I couldn't resist attending: I'd heard that 4E lead designer Rob Heinsoo was going this year, along with my childhood superstars Ian Livingstone and Steve Jackson, co-creators of the Fighting Fantasy gamebooks. Stacey and I packed a bunch of books on the off-chance of getting them signed, and headed up to London. Funnily enough, we found ourselves next to Rob Heinsoo on the tube to Kensington, but didn't introduce ourselves as we were only half sure it was him (choosing instead to eye him suspiciously). 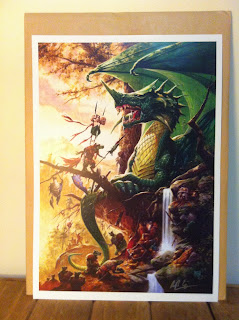 Dragonmeet has two gaming slots: morning and afternoon. We skipped the morning slot to catch the Games Workshop seminar and take in the stalls, picking up this fantastic art print from D&D regular Ralph Horsley (apparently it was scheduled for the Elminster's Forgotten Realms book, but somehow never made the cut!). The Games Workshop seminar itself was unmissable stuff. It was fascinating to hear how humble the company's origins were: with Jackson and Livingstone sleeping for months in a camper van parked outside their office, using the local squash club to shower and shave (apparently they got to be pretty mean squash players!). Their many anecdotes were accompanied by a set of slides, which included a rare showing of the original Talisman playtest, and early photographs of Steve and Ian alongside US contacts such as Gary Gygax and Fritz Leiber. Their passion for the hobby really shone through during the talk, and reminded me what a great debt we UK gamers owe to them!

After lunch Stacey got her Player's Handbook signed by Rob Heinsoo, who kindly took a few minutes to talk to us about 4E and 13th Age, his latest project. He came across as a really charming guy, and it was fascinating to hear his own thoughts on 4E's strengths and weaknesses. I picked up 13th Age a while back, so I'll have to give it a spin when we get the chance!

In the afternoon we played in Rich Green's 4E game "Flotsam and Jetsam", which was staged in Parsantium, a city of his own creation. Parsantium draws heavily on Indian and Asian mythology, featuring crazed cultists of Kali, the monkey god Hanuman, and Rakshasa overlords. I've always preferred Eastern over Christian myth for my fantasy, so I really enjoyed this setup. I also got to play a gnoll fighter, which was awesome because - well, gnoll fighter! In the end, "Shak" got to claim some heads, Stacey's Eladrin wizard got to cast some fun illusions, and our merry band saved the slums from slavers, Thuggee assassins, and various Underdark ne'er do wells. I was pleased to hear that Rich was the co-author of the wonderful 4E Midgard Bestiary, and is soon to be kickstarting the Parsantium city book (or more accurately kickfinishing, as it's already written!). You can check out his blog here.

Overall we had a great time, and are definitely up for more. My only criticism would be that attending both gaming slots means missing the stalls, so it would be nice if they stayed open a little later. Other than that, it was a real blast!