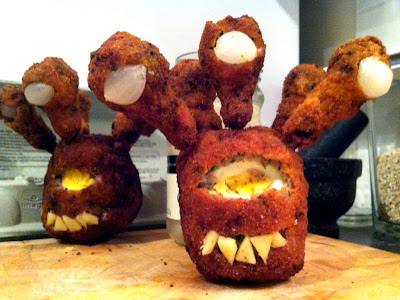 This ritual summons two Scotch Egg Beholders. Preparing the ritual takes roughly 30 minutes. Invocation time is between 10-20 minutes, depending on how many Beholders you can fit into your cauldron. 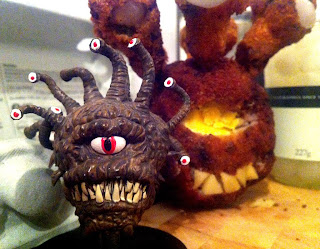 1: Place the eggs in a pan of boiling water and cook for exactly eight minutes. Plunge into cold water and then carefully peel and place to one side.

2: Place the sausage meat in a bowl with the thyme leaves, parsley and spring onion and mix well, seasoning with salt and pepper. Add a dash of Worcestershire sauce and a generous grating of nutmeg, if desired.

3: Tear off roughly 80g of sausage meat and place to one side (this will form the Beholder's eyestalks). Divide the remainder in two and flatten them into fleshy discs.

4: Dredge the eggs in a small handful of seasoned flour, and then carefully wrap the sausage meat around them to form a smooth surface. Make sure you've concealed all of your Beholder's eggy innards.

5: Take 12 of your cocktail onions and impale them on cocktail sticks. Encase each onion in a thin coating of meat, with a smaller coating wrapped around roughly 2.5cm/1 inch of the stick beneath. It's fiddly, so be patient.

6: Dip the Beholders and their eyestalks into their embryonic birthing pool (the beaten egg), and then carefully roll them in breadcrumbs. Press gently to ensure a good stick, and ensure every inch of their foul flesh is covered.

7: Heat 4cm/1.5 inch of oil in a deep pan, until a piece of bread sizzles and turns brown when sacrificed inside. Now carefully deep fry your Beholder's bodies using a slotted spoon for about 4 minutes apiece, turning regularly until they're nicely browned. Place on a kitchen towel to drain, and then repeat with the eyestalks.

8: Transfer all parts to the oven and bake for about 5 minutes, or until golden brown.

9: This is the trickiest part. Carefully cut a central eyehole into each Beholder's body using a sharp knife or scalpel. You're aiming to cut through the egg white into the yolk, which will form its pupil.

10: Cut a leering mouth just underneath, but only deep enough to separate the breadcrumb crust. Use slivers of cheese to create horrid teeth (if you find them difficult to stick, use a dab of beaten egg to fix them in place).

11: Now carefully cut a small eyehole into each eyestalk, exposing the pickled onion deep beneath. For extra measure, squeeze a second onion into each eye socket.

12: Impale each Beholder's body with six* of the eyestalks, laughing maniacally as you do so. Place on a dish and serve warm (or cold, both work).

*I know Beholders have ten eyestalks, but they don't fit. If that bothers you, you'll need to use an ostrich egg or something. 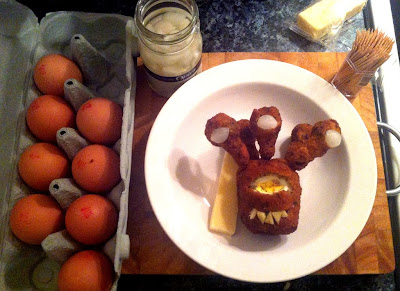