How should we describe NPCs? 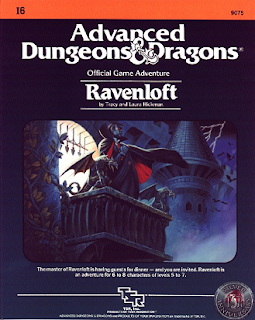 Warning: contains SPOILERS for I6: Ravenloft!

Ravenloft's tragic villain is one of the greatest NPCs of D&D's early history, coming with a fully fleshed-out backstory, multiple goals, and an ability to really screw with the flow of the adventure. It's a brilliant module - heck, it spawned an entire campaign setting - and Strahd himself is definitely one of the main reasons behind its success.

Flicking through the booklet afterwards, it was interesting to see how Strahd was presented alongside the other NPCs.

As with most old modules, the character descriptions are very game-focused. Strahd's backstory and goals are spread throughout the adventure: his history is explained via a player-handout near the back of the booklet, and there's a single quote at the start to give him a bit of character. For the DM's benefit, it could really use a nice character summary!

This got me thinking about NPC summaries in my own games. EN World's Morrus has announced he's running an adventure writing competition in January, and my current idea for a submission is fairly heavy on NPC interaction. How all those characters are presented in the text is going to be pretty crucial - both in terms of word count and usability.

Is there a "magic formula" we can turn to when listing NPC traits? What's most important to you - a description of how they look? Their motivations? A flaw? The role they play in the story? A "schtick" you can act out?

For me, I'm thinking high concept and motivation/goal are the most important NPC descriptors, even for those bit-part shopkeepers. A single-line description covering high concept and motivation is great for most NPCs. In short, it describes what their role is in the story. This said, background can also be important (i.e. how they came to be in the story), and if they're to play a long-term role, ideals and flaws seem like good descriptors too (i.e. how they'll react to changes in the story). That's probably all I'd need for 99% of my NPCs.

Describing how they look and act certainly feel distinct from these story elements: even superfluous. Most DMs probably just go with what works best for them at the time. Even so, for the most important NPCs of all, I feel a good module should offer some guidance on these areas.

In short, I think a good NPC description depends on how important the NPC is to the story, and should expand accordingly. Here's what I've come up with so far (with help from the kind posters at EN World!):

1: Simple named NPCs are described in a single sentence:
[Name] is a [high concept] who [motivation/goal].
"Arik is a dour barkeeper who has lost the will to fight against Strahd's evil."

2: Characters with an important story role have expanded detail on their goals:
[Name] is [high concept]. He/she has [short-term goal], in order to [long-term goal]".
"Ismark the Lesser is the determined elder son of the late Burgomaster, and the brother of Ireena Kolyana. Ismark is determined to reveal Strahd's evil to the Count's latest victims, in the hope they can save Ireena's life and avenge his father's death."

3: Characters with a dynamic role have additional background and personality traits:
[Name] is [high concept]. He/she has [background]. He/she has [ideal] but is hampered by [flaw]. He/she is [short-term goal], in order to [long-term goal].
"Ireena Kolyana is the unwittingly reincarnated form of Tatyana, Count Strahd's ancient love. Ireena was found by her adopted father in the woods beneath Strahd's castle, lost and with no memory of her past. She loves her adopted family, but is terrified of what her past may reveal. With Strahd closing in, Ireena offers to join the adventurers, hoping they will help unravel the mysteries of her past and free her from the Count's evil."

4: The most important characters of all include details on behaviour and appearance:
[Name], [Quote]
Paragraph 1: [Name] is [high concept]. He/she has [background]. He/she has [ideal] but is hampered by [flaw]. He/she is [short-term goal], in order to [long-term goal].
Paragraph 2: [Name] has [sensory cues]. When met, he/she is [behavioural cues].

Count Strahd von Zarovich
"I am the ancient. My beginnings are lost in the darkness of the past. I am not dead. Nor am I alive. I am undead, forever."

Count Strahd von Zarovich is the scheming vampire overlord of the cursed barony of Barovia. Centuries ago, the mortal Strahd made a pact with darkness to reclaim his youth and win the heart of the beautiful Tatyana: an act that ended in tragedy. Strahd longs for power, but is cursed to endlessly replay the events that led to his immortality - falling madly in love with the reincarnated forms of his lost love Tatyana. Strahd is currently luring adventurers into his realm so he can murder them and steal their identities, extending his malign influence far beyond Barovia.

In his human form, Strahd is tall and lean, dressed in courtly black silk, with a gaunt face and eyes like two bottomless pools of darkness. In person he is darkly courteous with guests and cruelly mocking to victims, flying into a bestial rage if his evil plans are foiled.
Posted by Will Doyle at 20:01