A World of Gears and Gunpowder

On top of my bi-weekly game, I’ve decided to start up another campaign for Friday nights. This gives me a chance to finally convert “Tabletop” over to 4th Edition: the homebrew world I built for the last edition. 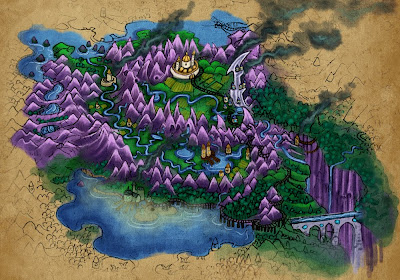 Start small, and work outwards- the guiding principle behind any new campaign

It’s a daunting undertaking, but starting a new campaign is certainly the best way to go about it. In fact, it gives me a chance to trim the world back to its barebones. With new characters (and new players!) there’s no legacy to get in the way. I can start again, and that’s liberating. I can pick the best bits, and focus on them. In Hollywood terms, it’s a reboot!

So how do you go about explaining a new campaign world to your players? Well, at work I’ve pitched a bunch of concepts to publishers, and I’ve learned that most people don’t like to read. I’ve seen the glazed look on their faces as they skim a concept doc, and fielded countless calls from bosses to “just boil this down to a one-pager”.

Not that I condemn them. In fact, they’re right - I don’t like reading either. If we sit down to play D&D, the last thing I want to do beforehand is trudge through a 100-page treatise about your world. Or a 10-page treatise, for that matter. No, if I'm to read anything at all, I want it all on a single page, damn it!

So without further ado, here’s the one-pager for my rebooted “Tabletop”, now called "The Riddle World". That’s nine points that spell out the lore of the world, all on a single side of A4.

But how does this gumpf actually affect the game? I guess, for me, back in 3rd Edition, it was heroes wielding pistols, battles atop chain-rails, and dangerous journeys into the null-magic that really defined my world. So “thaumatic power” and “fluctuating magic” were two systems I absolutely had to design before we began.

And here they are, for you. Hopefully, with a bit of imagination, you’ll find some use for them in your games!

Herein you'll find full rules for firearms, and a smattering of Steampunk items (including, to my knowledge, the first ever D&D bicycle rules!*)

Here you'll find rules for running fluctuating magic fields - which could be handy for an adventures set near a planar rift. Or maybe you could bring them into play for a magical storm, or an eclipse?
* Yes, that's right. D&D Bicycle Rules!!
Posted by Will Doyle at 22:45