G is for Grell 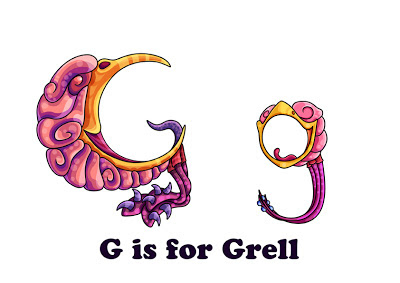 Grells are levitating horrors whose dangling tentacles secrete a paralyzing poison. They like to lurk high up in caves, dropping silently on their prey and hoisting them up to the ceiling, where they rip them to pieces with their sharp beaks. As a species they live together in weird "hives", communicating in a semi-telepathic language of chirps, squawks, and thrashing tentacle gestures. Each hive is run by a Patriarch, whose orders are passed on to the common workers by a caste of Philosopher Grells.

Strange that Grells feel the need to philosophize, given that all they do is eat people. Maybe they're looking for meaning. Judging by the picture above, they certainly seem to enjoy eating people - in fact, they find it pretty bloody humorous. That's okay. We find them humorous too, with their silly brain heads and daft beaks.

The internet tells me that Grells were invented by Ian Livingstone, which is pretty cool. As a kid I was fanatical about his Fighting Fantasy gamebooks, and even wrote letters begging for this-or-that to be included in future titles (probably Vampires! or More Wizards!). I actually met him later on in life, and had one of those silly moments where I just shook his hand and smiled instead of saying how much his books meant to me. Anyway, I'm far from alone in my fandom - in fact, Jonathan Green's got a kickstarter going on right now to create a commemorative book for their 30th anniversary. If you have any interest in gamebooks - even the history of D&D - I'd suggest you head over there and pledge!
Posted by Will Doyle at 13:01