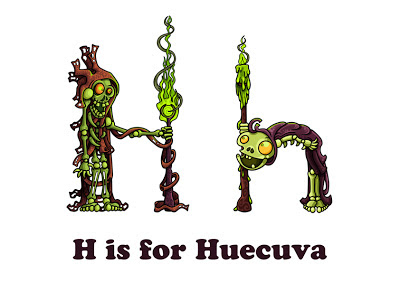 Who'd have thought that priests cursed by their god to wander the world as undead could be so cute? Huecuvas first appeared in the original Fiend Folio, and have since shown up in every edition of the game bar fourth. When a paladin fails his vows, or a priest commits an act of heresy, their god can curse them to come back as a huecuva (pretty harsh, if you ask me).

The monster's original entry comes from a magazine called "Underworld Oracle" (check the old-school pictures!), where they appeared in a Mesoamerican-themed adventure called the Forests of Yurupari.  "Huecuvu" are indeed part of South American myth: a type of plague spirit that can choose to appear in a variety of ghastly forms. Though the original adventure kept the monster's shapeshifting powers, these were ditched for later incarnations. Not so for their plague-tainted touch, which started out as yellow fever in the original adventure, changed to "acute cardiovascular-renal disease" in the Fiend Folio, and ended up as plain old "Heucuva Blight" in 3rd Edition.

Why would a good god curse its own worshipers to spread deadly diseases? It doesn't make much sense (unless it's to keep their other clerics busy!), yet I kind of like it. I prefer my gods terrible and unfathomable, rather than benign and predictable.
Posted by Will Doyle at 14:23